Cross-site Scripting is a problem in the world of the internet. Someone hijacks your web site by injecting a little bit of JavaScript code and suddenly he/she has access to pretty much anything they want on your site.

Douglas Crockford gave a talk at the end of March last year (at least, that’s when his video was published on YUI Theater) that partially discussed this problem, and this article is largely based off that talk. He noted the web’s vulnerabilities to these types of attacks, mostly due to standards that must be implemented by the browsers and having very little to do with bugs. He also felt, though, that JavaScript is one the best languages for creating secure code.

Anyone who’s had any good training in object-oriented programming knows about the concept of Information Hiding. Information hiding is done to prevent access to information from anyone who doesn’t need to know what it is. A concept that fewer people have heard of is Capability Hiding. Capability hiding is preventing access to methods or actions from anyone who doesn’t need to do that action.

Let’s use some diagrams straight from Crockford’s speech to demonstrate how you can hide and grant access to actions via introduction. To start out, Image 1 below shows three objects: A, B, and C. 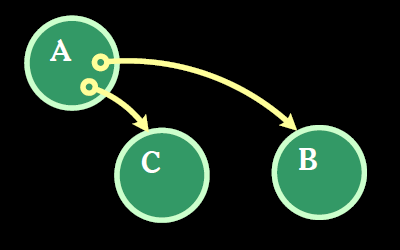 You can assume that A probably got access to B and C via either creation or construction. B and C, however, have no reference to A, nor do they have references to each other, so they have no way to communicate without those referenced.

In Image 2 below, A is calling B, and passing C in as an argument. In this way, A is introducing B to C. 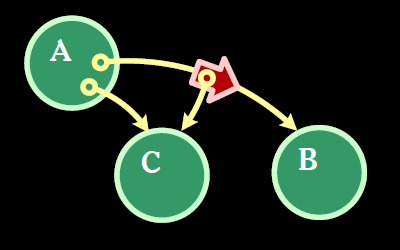 A calls B, passing in C

For those of you who may be having a slightly difficult time mapping diagrams to code in your head, the simplest way to represent this code is shown in Script 1 below. It’s extremely simple.

Now that B has been given a reference to C, it has the capability to communicate with C any time that it wants to, as show in Image 3. 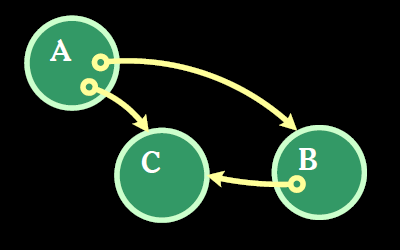 B can communicate with C

Another problem arises, though, when you only want B to be able to access C one time. In his speech, Crockford shows off some powerful code that allows A to revoke B’s access to C at any point.

There is one pattern that can help with this, though. It’s called the immediately invoked function expression. It’s looks a little bit like this:

As it says in the code comments, it executes right away, just like all of your other code outside of functions, so it’s just like normal code, except it’s all inside of a function so that every variable declared within it is private to that function. I’m sure you can do a search for “anonymous self-invoking function” and you’ll find more information.

Coming to a Close

You can go to Douglas Crockford’s video to see him give the presentation himself and to get some more insight into the world of JavaScript. The video was part 5 of his “Crockford on JavaScript“ series.

He also recommended a couple other resources within the video:

I hope this gets you thinking about security of your JavaScript applications. If you thought this was helpful or you just plain liked the article, please spread the word using the social sharing buttons below the post. Thanks!

Joe Zimmerman has been doing web development ever since he found an HTML book on his dad's shelf when he was 12. Since then, JavaScript has grown in popularity and he has become passionate about it. He also loves to teach others though his blog and other popular blogs. When he's not writing code, he's spending time with his wife and children and leading them in God's Word.